This scooter popped up on Pinterest the other day. A person powered scooter that fits on the rails. Primarily designed for maintenance and inspection work, it can be carried by one person and will carry 50kg of equipment. Available from Safetrack in Sweden. So it’s time for a quick look at what other forms of human powered rail transport exist. 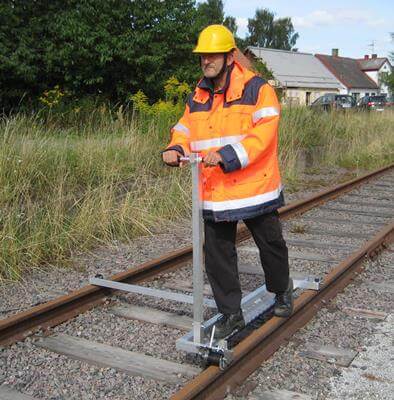 The most familiar is the pump truck, or pump trolley. Familiar to many people though cinema, from Westerns to Wile E Coyote, they’ve been around since at least the 1860’s possibly earlier. I’ve used one on a heritage railway and they can get up to somewhat alarming speeds when four people are cranking them. Some models don’t have a clutch so the handles move up and down even when not cranking them, which can be a bit hazardous. There’s a brief history of them here

Another Victorian development was the railbike, or Velocipede. Again, it was designed for maintenance and inspection, and early models operated the same way as pump trucks, the handlebars moved backwards and forwards in a rowing motion. Later developments brought pedal power, and they are now used for exploring disused railways, primarily in the USA, where lines are often left with the track intact, unlike the UK.

Quite a few early velocipedes still exist, mostly in museums, there’s a list of the surviving ones in the UK over at the Railway Velocipede Group site It’s a wealth of information, including news of gatherings, links to other sites, documents and catalogues relating to early Velocipedes and plans for building your own.

Some early Japanese tramways known as jinsha kidō ( human car tramway) were human powered. There’s not much information around regarding them, but it appears that there were dozens of them running over short distances on 2ft or 2ft6 gauge. They existed in the early 20th century and were quickly replaced by fossil fuel or electric power and had all gone by 1945. There’s not much information on them online, but here’s a short YouTube film of a preserved one, the Matsuyama Handcar Tramway. More information can be found on this LinkedIn Article and this enacademic article.

Finally here’s a couple of Youtube links to modern railbiking, there’s quite a few of there on Youtube. For more information I recommend the Railway Velocipede Group website, a large information resource for all things human powered that run on rails.